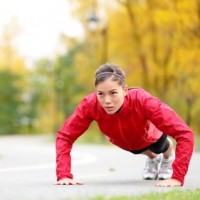 Can you do 100 push-ups right now? OK, ‘right now’ may sound outrageously impossible, but try the 100 push-up challenge and I’ll wager you can at the end of a few weeks. One of the most effective methods on how to achieve goals is to exercise the power of incremental steps.

I know because at the time of writing I am in the midst of the 100 push-up challenge. Week one I could barely manage seven push-ups. Today – a mere eight weeks later – I am churning out 130. Not all in one go, mind you, but the program is designed so at the end you’ll perform 100 push-ups in military succession.

The point is, over time small incremental efforts have great impact. The push-up challenge is an excellent demonstration of the amazing progress that can be made little by little.

It’s the series of small steps performed regularly and consistently towards a goal that ultimately brings you across the finish line.

If you need further convincing, think of skills you possess today that you probably take for granted. Remember, there was a time you couldn’t tie your shoelaces, drive a car, read, etc. Rome wasn’t built in a day either.

Tackling the most daunting of tasks, goals and projects by cutting them down to a series of incremental steps provides several benefits.

First, it gives you a manageable plan of action. It’s much easier to follow a plan than attempt progress on an ad hoc basis.

Second, it makes the progress steady and organic, which builds a good solid foundation towards your achievement.

Third, it helps alleviate the overwhelm of the potential enormity of what you’re aiming to accomplish by channeling your focus to one day, one step at at time.

Whether you’re aspiring to achieve something, become something, change something it is normal to wonder, or even doubt, if it’s possible for you to succeed. It doesn’t matter the size or magnitude of the goal. What is important is that you identify the specifics of your desired outcome, break it down into regular activity, and – most importantly – set to work on it.

Apply it to anything.

Here are a few examples:

Even on race day, you don’t just run a Marathon. You run a sequence of 26.2 miles, one mile at a time and – broken down to a further granular level – one step at a time. But you couldn’t arrive at the Finish Line any other way.

Ask yourself this question: What could I have achieved today had I started 6 months ago? One year ago? Five years ago?

The point isn’t to dwell on any shortcomings. Instead, make the same projections forward.

If you take a small action step today, tomorrow, and consistently over the following weeks and months, think where you’ll be six months from now. One year from now. Five years from now.

Don’t wait for the new year. Get started today. You’ll be doing 100 push-ups in no time!

View all posts by Cory →

By continuing to use this site, you agree to the use of cookies. More information here.